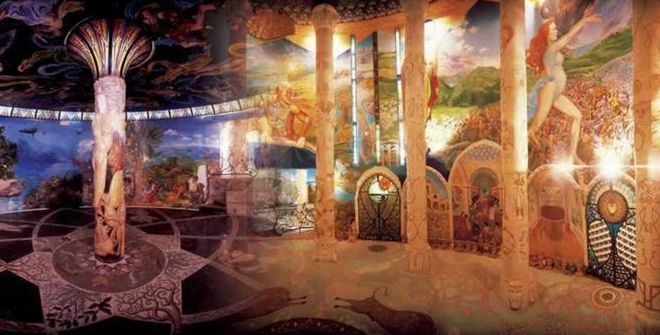 I'm writing this on my way home from a trip that ended with a short visit to Damanhur, an intentional community in Italy. With 1000 members it is, as far as I know, the largest in the world next to Auroville. But what makes it extraordinary is the worldview and mission that carries it.Damanhur is founded on a very rich and detailed mythology. It originates with its founder Falco, who in lectures and writings spanning several decades presented a kind of alternative history of humanity, with associated metaphysical and cosmological teachings. It involves galactic civilizations, prehistorical and para-historical civilizations on earth, a cosmic battle between the forces of life and anti-life, and a series of great defeats suffered by humanity in its galactic expression that cost us most of our senses and archetypes, leaving us with only a limited menu of archetypes and the five recognized senses. While these defeats happened millions of years ago, the Damanhurian worldview holds linear time lightly, which means that it is also happening right now. It also includes multiple future timelines. One of them leads to the final extinction of the divine aspect of humanity, corresponding to apocalyptic futures on earth related to catastrophic climate change, nuclear accidents, thermonuclear war, and so forth. A contrary positive timeline leads to a triumph over the forces of anti-life, and the recovery of lost human capacities and archetypes.

Against the backdrop of this mythology (thousands of pages of which I've condensed, hopefully not with undue violence, into a single paragraph), Damanhur conceives its mission as the serving of the positive timeline. At present, it could go either way. Both coexist well within the bounds of the possible. They speak of the "densification" of the positive timeline, which involves creating events and institutions that are aligned with it, that draw it into actuality through principles of resonance.

One needn't accept as "real" any part of the Damanhurian mythologies to participate in the densification of the positive timeline. Any choice, any action that is life-affirming rather than life-denying will strengthen this timeline. It is not necessary, I advised my hosts, to proselytize the explicit mythology of Damanhur. It is only necessary to create conditions from which people will act in accordance with a world built on love. That might mean presenting the mythology as fiction, and being cautious about how and when it is shared.

The reader may notice a paradox here: that this advice applies equally whether or not I personally "believe in" Damanhur's mythology. Aren't you curious whether I buy into it or not? The modern mind craves certainty, craves an objective starting point of the verifiably real before it proceeds to map out its future, wants to reason from first principles. I will not venture to say whether I believe Damanhur's mythology is objectively true or not. I will only say that I'm not using the word “mythology” in the pejorative sense that holds it as the deluded cousin or primitive forerunner of science. Science itself bears all the hallmarks of a mythology, including quasi-religious institutions, an initiated priesthood, rites and rituals, an implicate social and political order, and a set of unquestioned metaphysical assumptions. Chief among these is the doctrine of objectivity (a universe separate from the observer whose properties are fundamentally independent of the observer's beliefs, choices, actions, and state of being). That is the foundation upon which the reliability of the experimental method rests. It is also the conceptual wedge that sunders science from mythology (in the view of science, that is).

However we might venerate it or malign it, science has been an extremely generative mythology. To a large extent, its rituals (technology) have created the modern world. Equally, however, it has been a destructive mythology, as the ecological crisis makes plain. Therefore, many of us seek to abandon it, replace it, or expand it into something constitutionally different.

I seek its expansion. In seeking to expand the present dominant mythology we call science, we might evaluate an alternative such as the Damanhur narrative not according to the old standard of factual accuracy (which presumes an objective external reality) but by its coherency, effectiveness, and resonance. For me, the Damanhurian mythology carries the ring of truth despite its blatant contradiction with near-universally accepted facts of archeology and astrophysics, of which I am far from ignorant. And no, I'm not claiming that "science is wrong." I am holding multiple, contradictory narratives simultaneously, and learning to toggle among them as circumstances require.

I discovered on my visit that despite being at odds with conventional science, Damanhur’s mythology and its associated rituals have been impressively generative. What the Damanhur community has accomplished is astonishing. Most impressive of their accomplishments is the underground temple complex, constructed by hand, in secret, by a group of a few dozen people over more than a decade, without even their families knowing what they were doing, let alone the local authorities. This is no mere underground chamber; it is an impressive engineering feat that involved tremendous foresight to integrate its ventilation, electrical system, ubiquitous and highly intricate artwork, and esoteric systems that link its parts with fluids, crystals, and wires. Yet it was constructed by people with little or no experience in excavation or architecture, who had days jobs and families and who somehow managed to maintain their lives while working every night. On my tour I kept thinking, "According to what we normally consider possible, this place cannot exist."

I like to define a miracle as something that is impossible within an old story, but possible within a new one. One might say then that a useful alternative mythology is one that is capable of generating miracles; social, political, medical, or material.  My impression of Damanhur is that it is one of the hotspots of miracles on earth. Please, don't mistake my use of the word as a synonym for divine intervention. All I am saying is that unlike most metaphysical musings, the operating mythology of Damanhur is generating results. One of these is the temple. In a future post I'll talk a little about the singing plants.