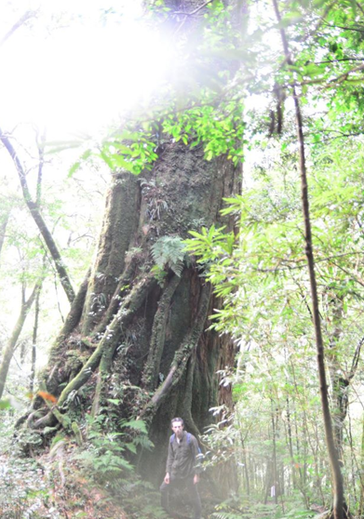 I had a magical day yesterday in Taiwan, full of symbolism. My friend from 20 years ago, Philip, picked me up at 6am from the airport and took me straight into the mountains, an hour on winding narrow roads, to go hiking. We followed a narrow trail requiring ropes in some places that supposedly had ancient trees. We didn't find any and we needed to turn back soon because we were tired and I was supposed to speak that afternoon. We came to a nasty muddy section that seemed like the spot to turn around, but I said, Let's go a little further, maybe there is a view there. We got past that section and there wasn't a view, just another rise, but then we saw a little sign that said "Come on! The sacred grove is only 5 minutes away!"

When we got there, the trees were incredible. Two thousand year old massive trees, fifteen feet in diameter, with ancient branches thicker than I am tall, covered with ferns and other plants, each a whole ecosystem unto itself. It was impossible to look at them without a nearly overwhelming feeling of being in the presence of a sacred being. Humbled awe. Yet it wasn't a stern sacredness but a benevolent one. They seemed to be communicating to us, giving us blessings and encouragement, and really happy to see us and be admired by us. Then we walked the hour or more down to the car, and a troupe of monkeys visited us, swinging directly over our heads. We were feeling so blessed until we got to the car and discovered the keys were locked in the car. My friend got anxious, and the more anxious he got the more relaxed I got, wondering what adventure the universe (or the trees) had arranged for us. I knew we would somehow make it on time, without being concerned at all whether we did.

This was a remote spot -- the nearest village was 20 minutes (driving) away. And his cell phone wasn't getting a signal. There was a little hut nearby and we asked the guy there what to do, and he let us use his phone but didn't have the number of anything useful except the nearest police station. I called them and they said they'd said someone. An hour later a police car comes and they are really gruff at first, but after 15 minutes or so we are pals. They had no clue how to get into the car either though. They called a garage but when they were told the price, they were indignant on our behalf and suggested we break a window. So I did (only getting cut a little bit.) We were driving really fast but suddenly a fruit stand called out to us and it turned out to be selling native varieties of apples and tangerines, little Taiwanese ones less than two inches in diameter, organic, and amazingly flavorful, as if all the flavor of a big one were packed into each.

The rest of the day was great, the speech, which I gave splattered with mud, was well received, and I felt really welcomed by this country. I am amazed how quickly my Chinese comes back, and with it a submerged aspect of my personality. When I am speaking Chinese I am somewhat of a different person, my quality of naivete is magnified and people just want to take care of me. The police, even the customs officials were so friendly.

Here is a little detail that conveys how magical my day was. On our way to the venue Phil asked me, "Is there anything else you would like to make this visit more fulfilling?" and I half-jokingly replied, "Well, I'd love to have some of those 'earth guavas' (little indigenous guavas that taste way better than the normal commercial variety but are hard to come by these days.)." Well, when we arrived at the venue, an old acquaintance, Dan, walks up to me with a bag and says, "I thought you might like to have these."

What was in the bag? Earth guavas.

It was like the island of Taiwan was saying, "Don't believe me that I love you? Well here are some earth guavas just to make sure."

It is usually not necessary to "decode" events like yesterday's in order to receive their medicine. Trying too hard to construe them as something, I risk conforming them to what I already know, or what the ego wishes were true. The symbol-laden experience, whether interpreted or not, imprints onto the unconscious mind and delivers its information, its medicine no matter what.

Yet certain events call more loudly for attention, through an uncanny vividness in their memory. I'm reflecting on the symbolism of yesterday. The Key to the Vehicle is locked inside the Vehicle itself, visible but inaccessible. It is the vehicle to get from the place of nature and magic to the place of my work, from the place of receiving to the place of giving. To retrieve the Key, authority was of no help. I had to smash something, shatter a Window. It required three blows to do it...

I can weave interpretations and stories of those threads, as I ponder how the message might apply to work, to love, to where I am in my life. It is surely useful to ponder that, when the symbols are so vivid. But what has in some subtle and indescribable way altered me is that image of that key sitting there on the seat. I can see it still when I close my eyes. I can see the shatter pattern of the glass and the fleck of blood on my knuckle. Those are part of me now.

What did it all mean? We shall see. But I know it meant something --and yes, if you are curious, yes there is a part of my mind that scoffs that I am merely projecting meaning onto random events, grasping for God out of a senseless flux of force and mass. That's OK though. The guidance we receive is in the end more powerful than our resistance. The symbolic mirroring of universe to self is not an entrance exam that depends on a correct decoding. The universe is more generous than that. At this moment, I feel held.

The medicine man enters the outer vestibule of the sacred healing chamber. He dons the ceremonial vestments and performs the …
Essay
More